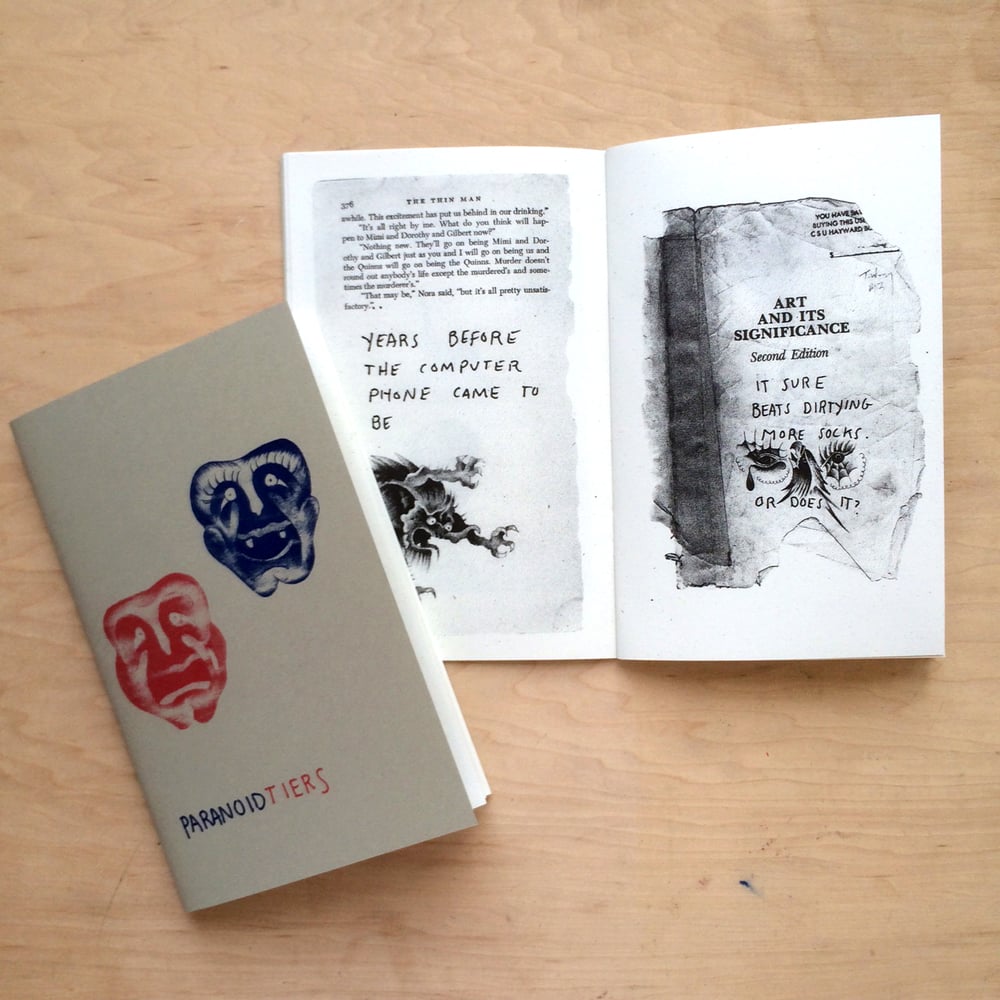 by Griffin McPartland and Paul Urich

Paranoid Tiers is a collaborative effort that involved Urich drawing a picture and mailing it to McPartland to add text. McPartland added random placements of words, comical social commentary, and other times a dark and emotional outpourings and paired them with Urich’s take on traditional tattoo art. As a whole, the zine takes on a narrative of two human lives lived and documents a conversation between friends. The result is truly fantastic. The publication contains 67 exchanges of words and imagery that were passed back and forth between the two.

I was never driven to make anything for the public eye that didn’t revolve around making the viewer chuckle and think of me as an idiot, it served me well. Paul, on the other hand made things of delicate beauty, soft images of family members passed on and abstract images I imagine one sees when they are free. We had similarities and were quietly intrigued by the other (yeah, presumptive, I know). In around 2004 or 5, I was hanging around while Paul and others would install shows and in doing so I would empty bottles and write nonsensical notes on scraps of paper and leave them to be cleaned up later, usually by me, the hanger on-er.
Paul, unbeknownst to me began to collect these along with some other pieces I had made in the same vein, for shows coinciding with the Hot & Cold project. Years later Paul showed these at his gallery Nowheresville in San Francisco, I was taken aback with how much he had saved from the trash and put a frame around. I had an audience, albeit an audience of one, but I will play to that part of the room until it empties.
We would meet up for breakfast occasionally, I would just be getting off work (don’t ask) and Paul would be coming from dropping his daughter off at school. We would talk about our former creative selves and how something was miss- ing. He suggested we collaborate back and forth over the course of a year and have a show. I flat out refused. I don’t draw or paint. I make cutting observa- tions that feel passive aggressive and petty. I didn’t see the relationship between his beautiful images and my angry dialog. Despite me, a few weeks later in February of 14, Paul sent me a package. It was to be the first of many. I held my pitt pen tightly and imagined what I would do that would lend itself to the image without ruining it altogether. Writing on these drawings felt like masturbating on an expensive dress in the changing room of a fancy store and leaving it for someone else to find. Dirty and impulsive. Then one day, like the obsessive master jacker, I stopped worrying about making a mess and wrote whatever came to mind on these articulate graphite drawings on old stationary, and sent them back to the city. More would arrive, I would attempt to turn off my concern and chip away at the stack. Soon, I began to get antsy, I would tear pages out of old books I had found in the trash, write on them and mail them to Paul. The dynamic was reversed and the project gained momentum. The conversation began to take on new directions that surprised the both of us. This shit was fun.
Neither one of us ever had any expectation when we started this correspon- dence. We are just two friends connecting the dots that were laid out long ago at the Berkeley skate park. This was Paul’s idea and I hated the thought initially. As we approach the show and subsequent publication of this proj- ect, I feel more excited by this collaboration at age 40 than I have about anything years prior and I hope that the mail never stops coming. – Griffin McPartland